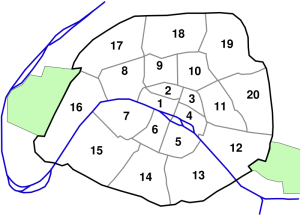 Paris, what a city ! As you may know, Paris is divided in 20 districts, called « arrondissement », shaped as a giant snail. Paris is a city full of history that you can see by the architecture of the buildings, streets and parcs. Here we will break down for you the different districts (arrondissements) and neighbourhoods, so that you can learn more about the city you are going to live in !
To give you a brief idea of the geography, the main touristy areas are in the centre of Paris. The more you go towards the outskirts of Paris, the more you will see real life, but less monuments. The West side of Paris is rich and residential, the East more lively and popular.

In Italy « all roads lead to Rome », well in Paris they all lead to Chatelet, a hub in the centre of Paris. From there you can walk to the Tuileries garden, the Louvre and many museums (Musée des arts déco, musée de l’Orangerie…). It is also a great neighbourhood for shopping, with rue de Rivoli and La Canopé des Halles, an old supply station that has been turned into a mall and an underground network. In this ‘’arrondissement’’ is also the famous Ile de la Cité, one of the two islands in the centre of Paris, where you can find the old courthouse. Overall, the first arrondissement is beautiful but very touristy. 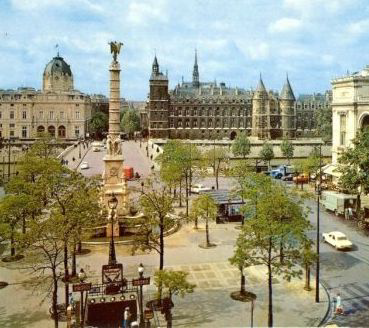 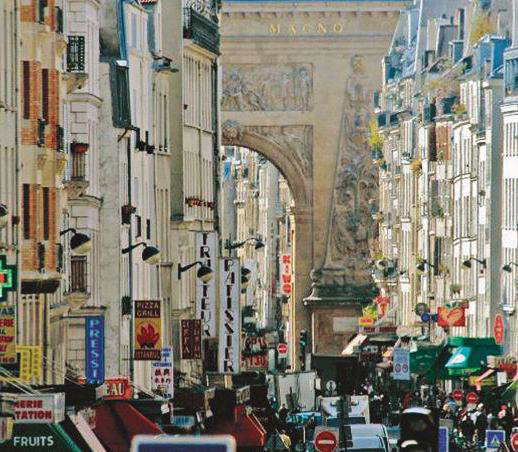 The second arrondissement is a very small arrondissement divided in two neighbourhoods. « La Bourse » at Richelieu-Drouot, where the stock market
is. You can find many haussmanien boulevards such as Boulevard des Italiens. Many offices are in this neighbourhood, and if you walk by around noon, you can watch workers heading to lunch in their suits. An other neighbourhood is Sentier, where the textiles shops used to be. In a minute you can go from the luxurious part of Paris close to the 1st arrondissement to a neighbourhood full of thrift shops, bars and theatres, near the 10th.
Overall it is a very lively neighbourhood that isn’t as touristy as the first.

Le Marais neighbourhood is historically known for its LGBTQ+ and its jewish community. You can see rainbows painted in the crosswalks. The centre of the Marais is Place Saint Paul.

You must go through Place des Vosges, an old square surrounded by private mansions. You can go grocery shopping or go have brunch on Sunday at the Marché des enfants rouges, an old market hall. In the fourth you can find the city hall « l’Hotel de Ville », where you can go iceskating in the winter. Next to it is the BHV Marais, an old store that sells anything and everything. It has a (popular) rooftop « Le Perchoir », with a beautiful view of the city.

On a smaller budget, you can eat some famous falafels rue des rosiers, or go for a drink Place Sainte Catherine. If you go a little more South there are the two Parisian islands, Ile de la Cité and Ile Saint-Louis. Many Parisians site by the river ‘’les quais de Seine’’ during the day to read and lay in the sun, or at night with friends and some wine. 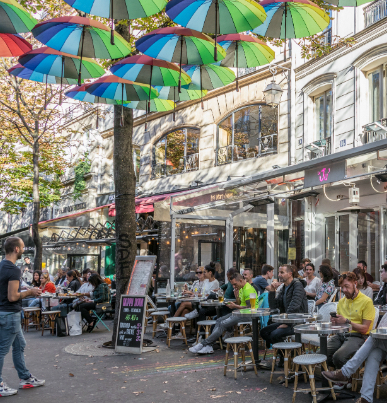 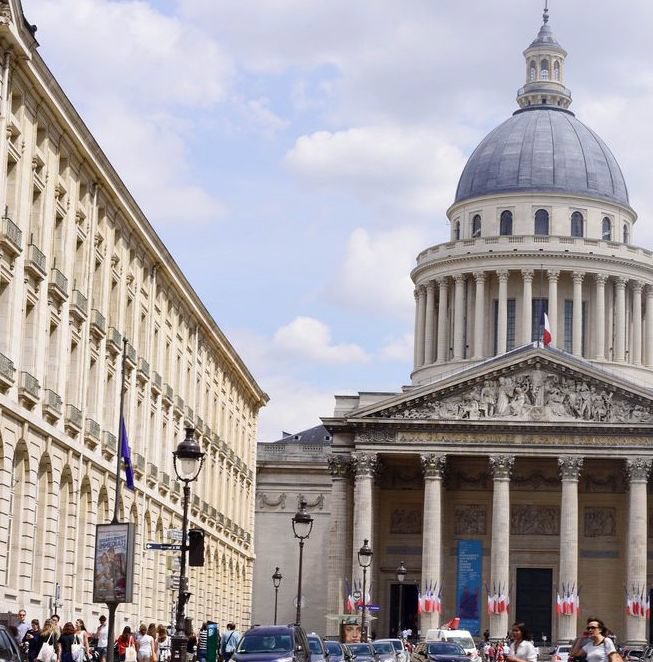 The fifth arrondissement, also known as the latin quarter, is a very popular student neighbourhood. It has many high schools and universities, as well as many bars on rue Mouffetard and place de la Contrescarpe. It is old and beautiful, with monuments as the Panthéon, where famous people are buried, les Arènes de Lutèce and the Institut du monde Arabe.

Many law students study at the Bibliothèque Sainte-Genevieve or

Bibliothèque Sainte-Barbe, two beautiful libraries close to our campus. On Wednesdays, Fridays and Sundays, you can have a look at the food market Place Monge. You can also walk through the Jardin des plantes, a garden where there is the Museum of natural history, a zoo and a maze.

The sixth is mainly known for two things: the Luxembourg garden, where the Sénat is located ; and the Saint-Germain-després neighbourhood with its famous cafés, where artists used to live. You can go shopping on Rue de Rennes, a big street that goes from Saint-Germain-des-prés to Montparnasse. Around Odéon is the more lively part of the arrondissement with many theatres, museums and the famous book store Gibert jeune. 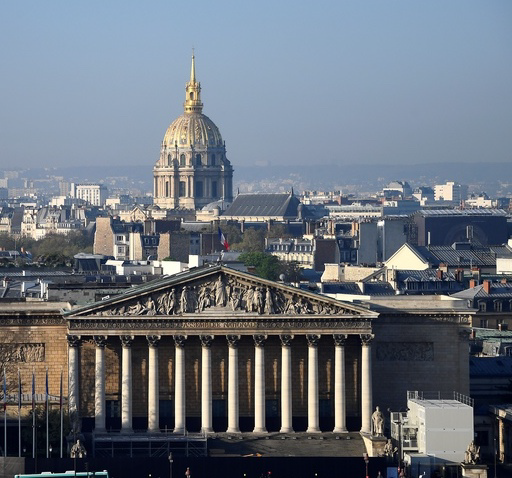 This arrondissement is full of famous monuments and buildings like the Assemblée Nationale, the Hôtel de Matignon, UNESCO quarters, the Invalides or Rodin museum. In this arrondissement there is also the famous Eiffel Tower.

At night, people gather on the grass in front of les Invalides. There isn’t really any student life, mostly big empty streets with important buildings.

This very chic neighbourhood that goes from Place de la Concorde to the famous Champs Élysées, where you can find luxurious stores. You can also visit museums such as the Cernuschi museum or the Jacquemart André museum.

You can walk through the Parc Monceau, one of the only gardens in the West side. 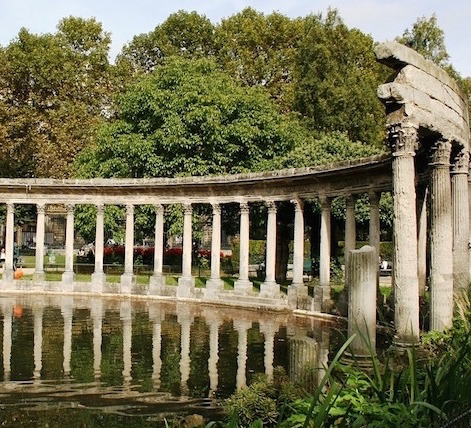 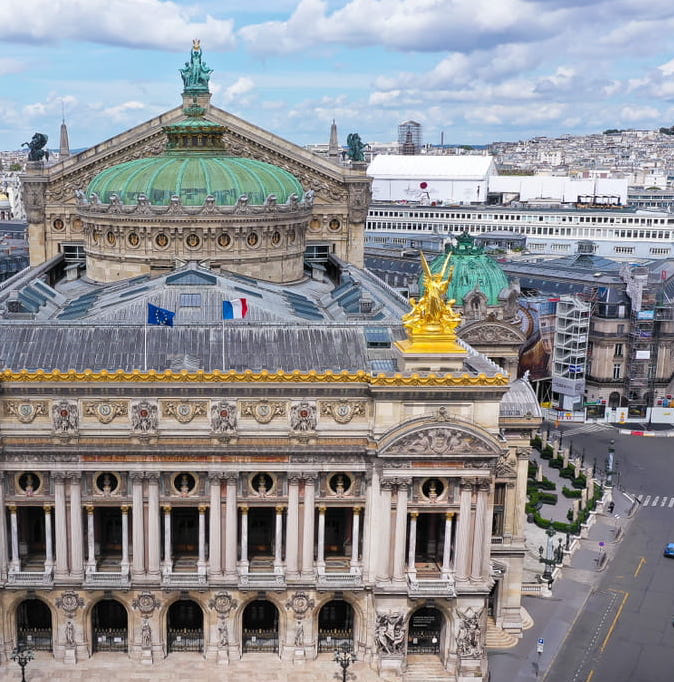 This arrondissement has different sides. On one side you have big boulevards where you can see shows at the Opéra Garnier and Folies Bergères or go shopping around Gare Saint Lazare and Galeries Lafayettes.

The upper side of the arrondissement is full of small parisian streets where it is wonderful to go for a walk and go sit at a café around Saint- George, Notre-Dame-de-Lorette, Cadet and Pigalle. You can also go to the musée Grévin, the musée de la Vie Romantique or the Great Synagogue of Victory.

For the last couple of years, this arrondissement has gone through a lot of changes. Today it’s considered « bobo » (bourgeois-bohème). There is the Canal Saint- Martin where you can have a drink and Le Point Éphémère a famous bar. Strasbourg-Saint-Denis is full of theatres and bars. Place de la République is a huge square where skaters often meet ! You can also go to the Saint Martin market. 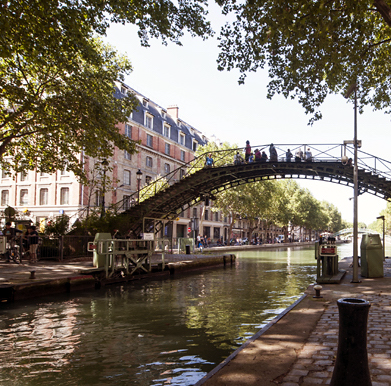 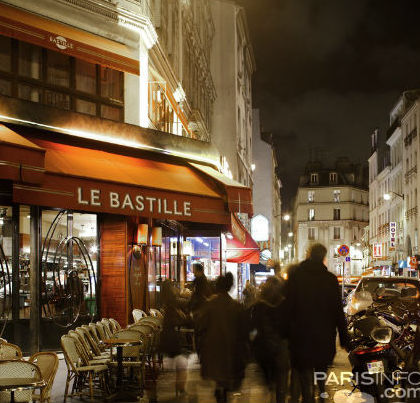 This arrondissement is the typical « bobo » parisian neighborhood. Many students meet up close to Place de la Bastille, where you can find bars rue de Lappe and rue de la Roquette. Hip stores are found on rue de Charonne.

On the cultural side there is l’Atelier des Lumières, a museum that projects famous paintings in huge rooms as new way to see art. After a hard week of work, you can go have a drink at the Panam art café where you will see stand up comedians, or go to the rooftop Perchoir de Ménilmontant. If you love fruits and veggies, every Tuesday and Friday there is a market on Richerd Lenoir boulevard.

This arrondissement is more laid back. Old train tracks have been turned into a high garden you can walk along, this walk is called La coulée verte. An old warehouse, Ground Countrol, has been turned into a place where you can find hip stores, drink a cocktail and play on the ping-pong tables.

You can go to expositions and watch old movies at the cinémathèque. Every day you can go to the affordable Aligre market to get your groceries. You can even go to concerts at the Accord Hotel Arena or at the Supersonic. 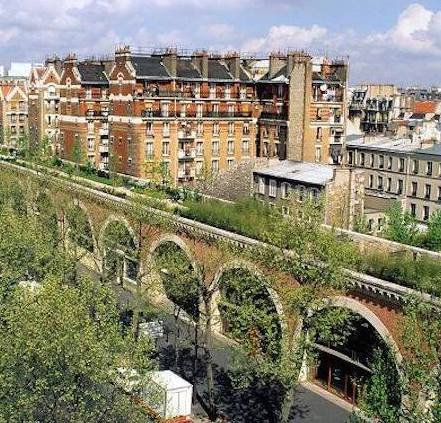 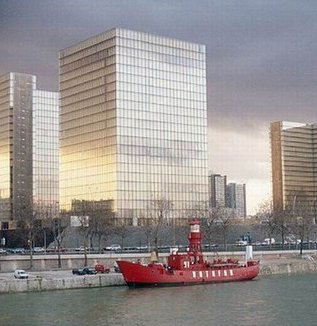 This neighbourhood is home to the campus for first and second year law students. The 13th tends to be more modern than the rest of Paris, with buildings that were built in the last century. You can study at the French national library (BNF), a modern building near the river.

There is also a Chinatown, where you can find many asian
restaurants and the famous asian grocery store « Tang frères ». In the older neighbourhood, « La Butte-aux-Cailles » you will find a lot of street art among the small and narrow streets. Along the river you will see many boats, including « La Barge du Crous », a state-owned restaurant where you can have lunch for 3,30€ with your student card ! They also serve brunch on Sunday.

From there you can see the design and fashion museum « La cité de la mode et du Design ». If you like to swim, you can also go to the incredible Josephine Baker pool.

In this arrondissement you can find lovely neighbourhoods where tourists don’t really go. Go for a walk and a drink around rue de la Gaité and rue Daguerre, or sit in the beautiful park , Parc Montsouris. If you want to have a crepe, rue Delambre is the place to go. You can go to the Catacombes, but you will have to wake up early as many tourists go there. You can look at some contemporary art at the Fondation Henri-Cartier-Bresson. 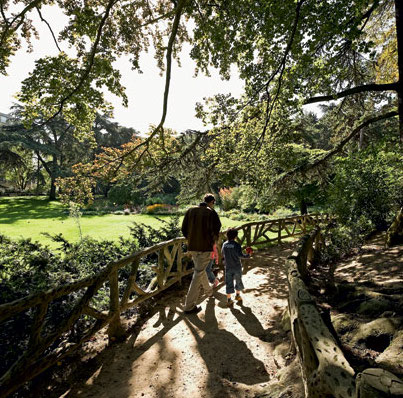 This is the biggest arrondissement, and it’s mostly residential. For
a walk you can go to rue du commerce, or sit in the Parc André-
Citroen, where there is a hot air ballon. For shopping there is the
Beaugrenelle mall. You can even visit the Bourdelle museum,
where Chagall used to paint.

Known as a very chic and rich neighbourhood, here you can find many embassies and villas, but also museums. The Palais de Tokyo, is a contemporary art museum with a terrasse from which you can see the Eiffel tower. There is also the Le Corbusier museum and Balzac’s house.

On the outskirts you can go to the Bois de Boulogne, a big park that home to the Fondation Louis
Vuitton. 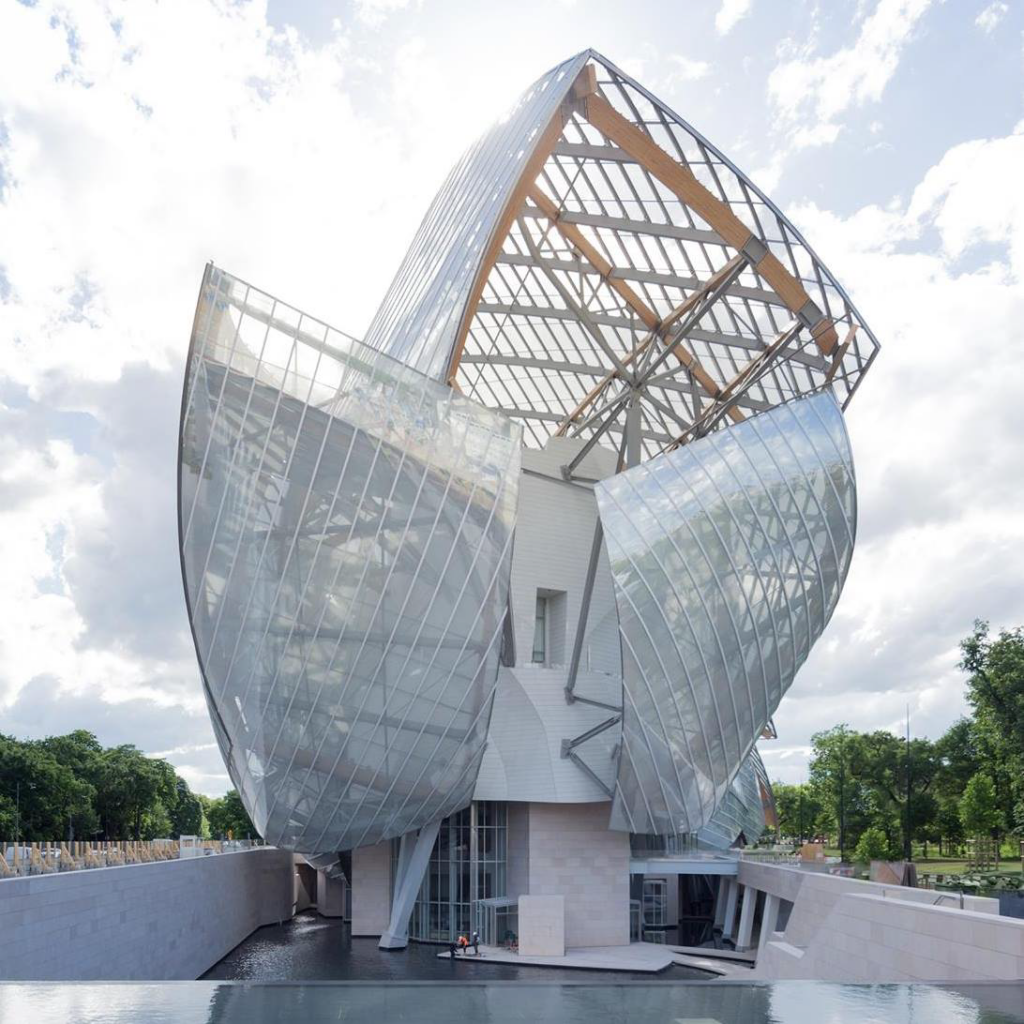 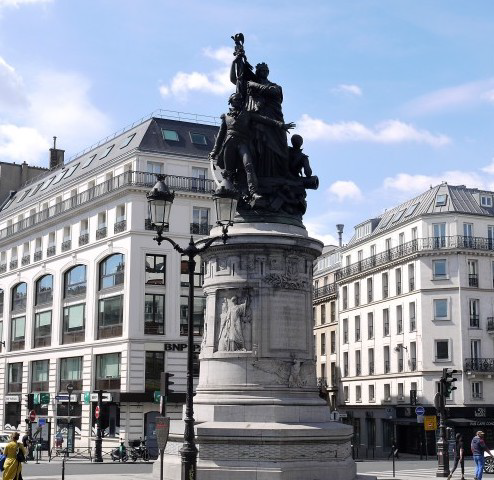 Most of this arrondissement is also known as being rich and residential. You can mostly find big haussmanian boulevards.

However, the « Batignolles » neighbourhood, with la rue des Dames and rue des Batignolles, is full of life. Younger people meet there or Place de Clichy to have a drink and a bite to eat. It is in this arrondissement that you will find the new « Tribunal Judiciaire de la ville de Paris ».

This arrondissement revolves around the butte de Montmartre, on top of which is the Sacré Coeur church.

Many artists used to live in this neighbourhood. You can have a look at the Moulin Rouge, the « mur des je t’aime », the famous « Maison Rose » and the statue of the French singer Dalida. From the front of the church, you have an incredible view of Paris. If you head a little bit North, behind the buttes, this is where the real life is.

There are many paved narrow streets with shops and cafés, especially around Abbesses and Lamarck. 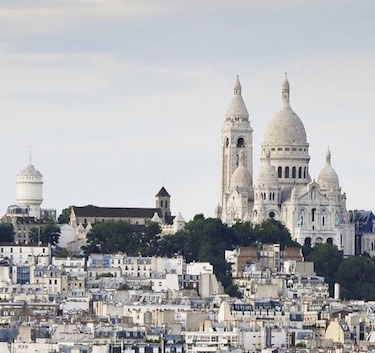 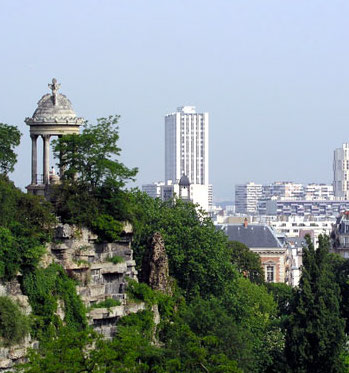 A very pleasant neighbourhood, with the canal de l’Ourcq, la Villette, and the Butte Chaumont parc. You can go for a wonderful bike ride along the Canal de l’Ourcq, that leads to La Villette. Along the canal you can find hip bars and cafés, such as the Panama Brewing Company. At La Villette there is the museum of sciences and industry as well as concerts.

The Butte Chaumont parc is on the hills, offering a beautiful view of Paris while you get a beer and dance at the Rosa Bonheur bar. Unfortunately, this neighbourhood has a bad reputation at night especially around Stalingrad.

This used to be the industrial arrondissement. It has been totally refurbished, and now has a chill and bohemian vibe.

You can see a lot of street art, and the Belleville neighbourhood, full of chinese restaurants and galeries, it can sometimes feel like a village. Around Menilmontant, students go to grunge bars and concerts. You can try to find famous people buried at the cimetière du Père Lachaise. 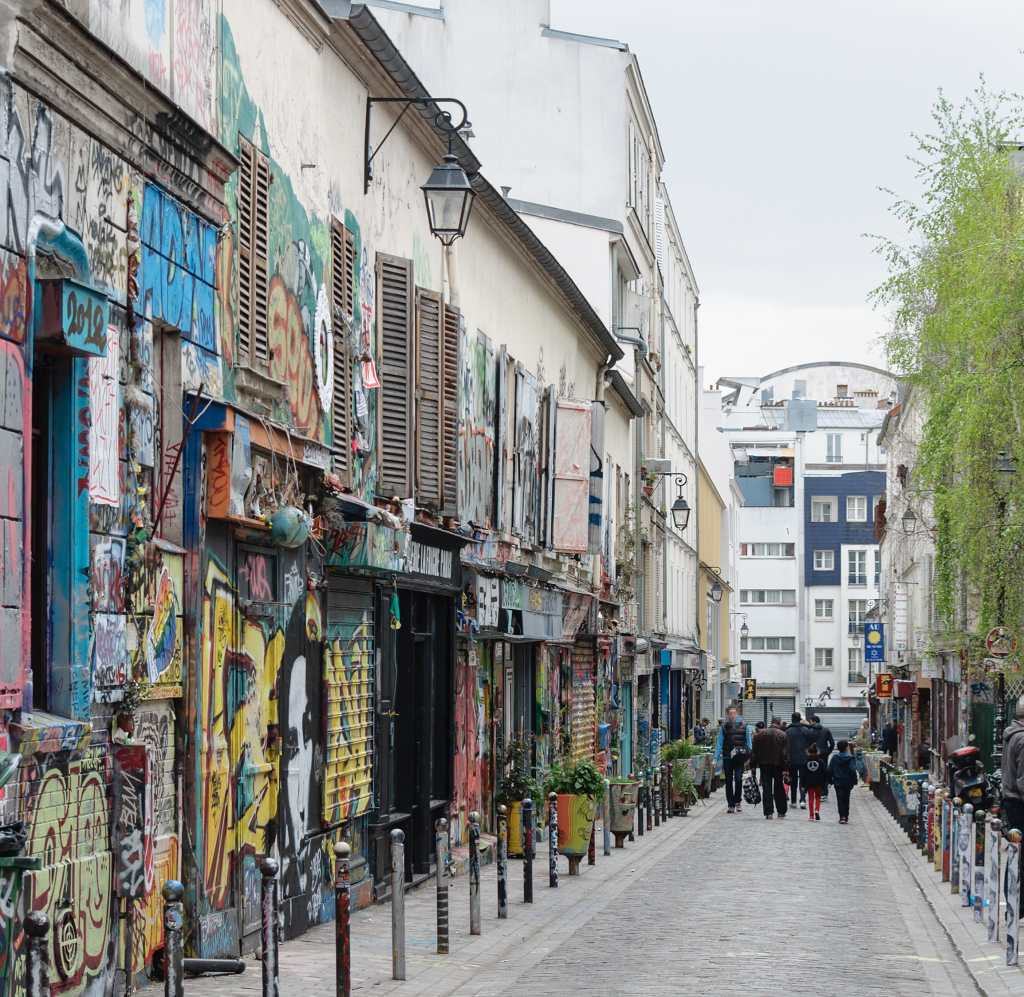